The US census has a population total for Naples of 20,000. But census population totals do not included second home residents. Homes of seasonal residents are considered vacant for census counts. As the City has around 18,000 housing unit, the seasonal total for the City would be more around 34,000. 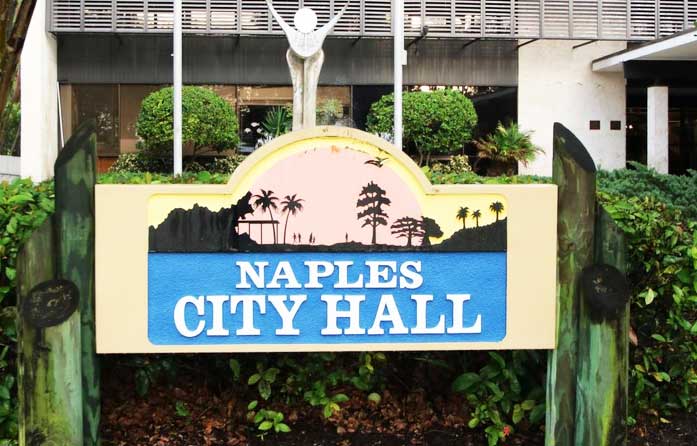 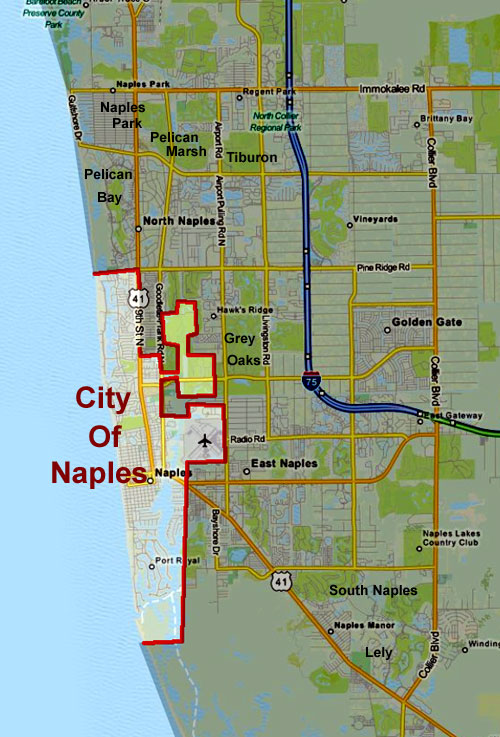 City of Naples Map
There is no difference in the scenery when driving within the Naples City limits or the nearby surrounding area, it is all beautiful, lush and tropical. The City is surrounded by hundreds of small and large developments, some with several thousand homes.

Condos represent 65% of the City’s housing. Compare that to 26% for the US. There are condo communities scattered throughout the City, but it is the concentration of beach condo in the Moorings and Park Shore neighborhoods, that makes condo ownership percentage so high.

The Naples neighborhoods West of Highway 41, particularly those on the water are some of the highest property values in all of Florida and for the United States. The tax assess value for some homes exceed $50 million. The average for the City is in excess of $1 million.

Their western border of this area is the Gulf of Mexico and the eastern border is US41 also called Tamiami Trail North and also 9th Street. All City residents of these neighborhoods are within 1 mile to the beach

Park Shore
Park Shore is the furthest northern neighborhood within the City of Naples boundaries. Park Shore has the areas highest concentration of beach high rises. The combined real estate market value of the high rises is in excess of $4 billion.

Homes located on the Venetian Bay within Park shore are the highest value single family homes in the Park Shore neighborhood. But homes not on the Bay command a high prices, due to the areas desired location. The least expensive properties in Park Shore would be a series of Garden apartments located on the eastern edge of Park Shore.

Moorings
The Moorings is somewhat similar to the Park Shore neighborhood, except the condos and homes are a little order for the most part. The Moorings does not have high rises on the beach. Beach condos pretty much cap off at no more than seven stories and are referred to as mid-rises. As with Park Shore the most expensive properties are located on the beach or the bays. The least expensive are Garden apartments on the eastern edge (near US 41).

Coquina Sands
Coquina Sands is a smaller neighborhood just north of Olde Naples. There are a few beach condos, non-beach condos and a series of picturesque winding streets with single family homes. Coquina Sands was built mostly in the 1970s.

These neighborhoods are just south of old Naples and are all single family home residential, there is no retail or commercial services in these neighborhoods. These would be some of the Naples area’s most expensive properties, either on the Beach, the Naples Bay or along canals with Gulf access.